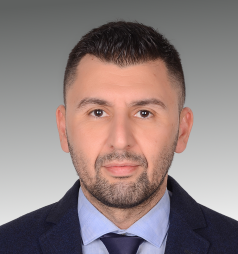 Erol Diniz has over 15 years of experience in the Oil and Gas Industry, having spent the majority of his career at Viking as Drilling Superintendent (2011-2018), Drilling and Workover Manager (2018-2021). Recently, in July 2021 Mr. Diniz was promoted to the Global Drilling Technical Manager position in Viking.
Erol Diniz was responsible for maintaining 6-Drilling Rigs and 2-Workover Rigs Operations in Turkey throughout these years and now along with his Drilling and Workover Manager position in Turkey, Erol is taking in charge of the 2000 HP rigs operations outside of Turkey especially about the execution of the technical operational plans hand in hand with operations management. Formerly Mr. Diniz was working in Thrace Basin Natural Gas Co. as Drilling Supervisor and Senior Drilling Engineer respectively between 2006-2011.

Mr. Erol Diniz is a graduate of the Faculty of Engineering at Middle East Technical University in Ankara with a BSc Degree in Petroleum and Natural Gas Engineering.